Full Name
DJs Amira & Kayla
Job Title
Entertainment
Company
Entertainment
Speaker Bio
While most 14 years old kids are playing the latest video games on their smart phone, twin sisters, Amira & Kayla are making a name for themselves around the world as
famous DJs.

When behind the turntables, this duo gets the party started, kicks the crowd in gear and makes sure the momentum never ceases. Amira & Kayla’s love for music and their devotion to the DJ craft is rooted firmly in family. Their father taught them how to DJ at an early age. This unique sister act have quickly gone from playing small parties to deejaying major corporate events, lighting up social media with viral videos and
making high-profile appearances on major television, online, and radio programs.

When Amira and Kayla are not appearing on TV or online, they can be found deejaying for major celebrities, sporting teams, brands, and exclusive VIP events.

Praise for the twins is coming from their fans and today's hottest DJs, Music Producers & Entertainers. Amira & Kayla have quickly gained a large online following including super stars like Rihanna.

Everyone seems to agree Amira & Kayla are two amazing kids with awesome musical talent who prove you’re never too young to follow your dreams!
Speaking At
Live DJ Set @DJsAmiraandKayla 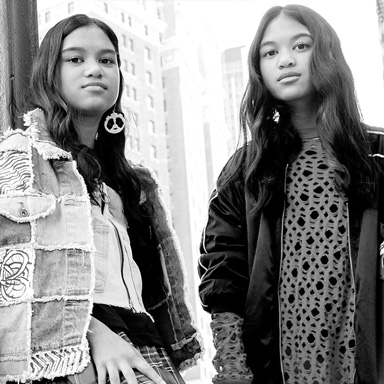