Full Name
Jendayi Smith
Job Title
Senior Graphic Designer
Company
Mattel
Speaker Bio
Jendayi Smith, Senior Graphic Designer at Mattel, is a Broadway musical loving world traveler and design enthusiast. She's originally from Oakland, CA but spent many years living on the east coast where she earned degrees in fashion at Howard University and F.I.T. During her 8 years living in New York City, she had the opportunity to work in many areas of the fashion industry including design, product development and personal shopping.

Upon moving back to her home state of California, Jendayi made a serendipitous career change and began working in the children’s toy industry. Since starting at Mattel in 2014 Jendayi has had the privilege of working on brands such as Monster High, Polly Pocket, Harry Potter, BTS and many more. When she's not designing toys, you'll find her reading a book, frolicking in nature or planning her next big adventure. She currently resides in Los Angeles, California with her husband, son, dog and cat.
Speaking At
Pass the Mic: Making Space for Black Women to Lead 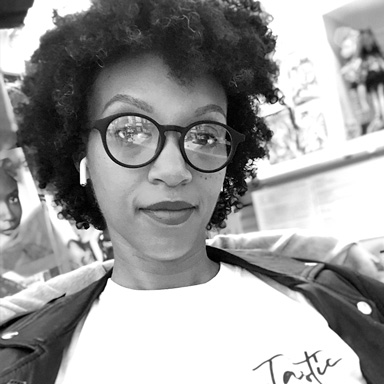